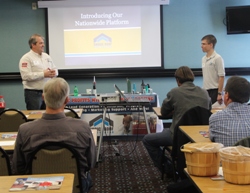 What started five years ago as an ambitious idea pushed forward by Samuel Hostetler and Jonathan Keim is now a national success.  Both men knew there was a piece missing in the commercial roofing marketspace.  There had to be a way for commercial roofing business owners to be properly incentivized to help others, while providing better service for their own clientele and growing their businesses.  And with that, the idea of Choice Roof Contractor Group was born, founded, and took off!

The group is now well known for uniquely offering support to contractors who wish to expand their commercial business and providing new valuable benefits to building owners.  By delivering a better service, encouraging higher standards, and providing leadership, guidance, and training opportunities, Choice Roof Contractor Group has become a recognized name in the commercial roofing industry.  Members of the group have noticed the increasing credibility on the jobs they’re bidding, and business owners have enjoyed the peace of mind that comes with group-wide accountability.

The last five years have been full of new experiences and a pathway to success for members of the group!  Below, you’ll find a recap of the past five years.  If you’re interested in joining our nationwide network or discussing new collaboration opportunities, give us a call at 800-670-5583. 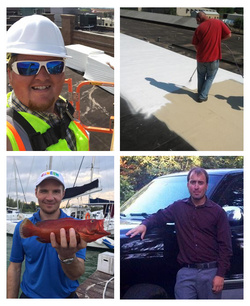 In the fall of 2013, Choice Roof Contractor Group was formed. Soon after, the first few contractors joined.  Brenneman Roofing, Mid-West Roofing Systems, Five Star Roofing Systems, A-1 Roofing Systems and Troyer Roofing.  Their stories are all similar and have inspired many struggling contractors throughout the country who wish to break into the commercial field.

Robert Brenneman, owner of Brenneman Roofing, had been working as a full-time fire fighter with a side business of being a handyman.  He worked day in and day out on time-consuming jobs that did not provide for his family the way he hoped they would.

John Miller, owner of A-1 Roofing Systems, was struggling to gain traction in commercial roofing and to make ends meet, getting only small jobs for small buildings in a small town. He ended up taking some residential roofing work just to help generate cash flow.

Samuel Hostetler, owner of Five Star Roofing, was shingling roofs in freezing weather just a few years before starting the group, knowing there was more, but unsure he’d be able to invest.  After all, he had a very large family to provide for.

Simon Troyer of Troyer Roofing had always worked on various small construction opportunities but was searching for a change.  He began to learn the construction trade, remodeling, roofing, and other carpentry aspects, but after working for others for five years, he knew it was time to make a change and do something of his own.

Rufus Hostetler, owner of Mid-West Roofing Systems, landed his first commercial job prior to joining the group and had early success. But he couldn’t seem to find both the time and money needed to live his dreams.

When each member joined Conklin and the Choice Roof Contractor Group, they began to see their future change.  They were impressed with the trainings and felt that they could better provide with this new business opportunity.  And over time, they did just that.  All three of these contractors took the time and effort needed to utilize the tools in front of them.  And because of that, they are successful in their local regions, and continue to see the benefits of being endorsed members of the Choice Roof Contractor Group.

To hear, read and watch dozens of other real-life stories, visit our What Contractors Are Saying page. 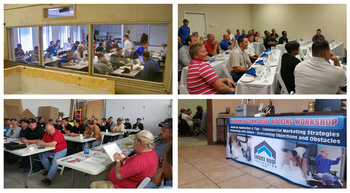 At the beginning, the idea of the Choice Roof Contractor Group was one of faith. Founding members were on board for something new that could solve the pressing challenges of the commercial roofing industry. And with that came many wins!

The initial group of endorsed members received 100 leads in the first year and we began to see leads continue to increase in size.

We partnered with Top Roof Marketing to maximize visibility of what we had to offer the industry while ensuring new members had a trusted source for generating more leads.

They also were able to witness some of our first meetings, gained numerous sponsorship/mentorship opportunities over the years, and continually receive special recognition for helping the group concept become a reality. 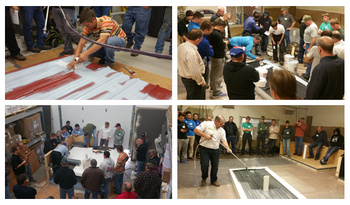 After the first year was fully under our belt, we discovered what worked best and kept feeding that model. For example, our lead generation service provided over 200 roofing leads in 2015, double what it had the prior year! We also saw a significant jump in the number of leads that were over 100,000 square feet.

The first workshops were also rolled out this year which together had more than 60 in attendance!  The first workshop had over 35 attendees traveling from 9 states.  The second workshop had almost 30 contractors from 8 states!  They all came together to discuss roofing techniques, marketing and sales strategies, and more, really embracing the model that Choice Roof Contractor Group wanted to provide – contractors helping contractors.

Members of the group continued to see rapid growth in their individual businesses, the success stories kept coming in, and new ideas from others joining up took us to the next level.

To see more details of this year, visit 2015: Year in Review. 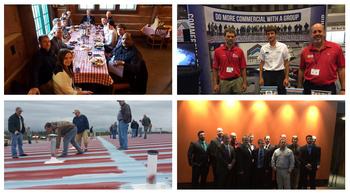 The year of 2016 was by far the best on the books at that time.  The continued effort to provide lead generation through the group website enabled endorsed members to share 302 roofing leads with each other! Another 50% of growth!

We also saw the largest attendance ever from our group at the Conklin National Convention, rapid growth in the size of our group across the country, and founder Jonathan Keim was given a prestigious title.

Additionally, like the year prior, the group members came together for another two contractor-led events.  Both workshops completely sold out!

A missing piece to the puzzle in prior years was not engaging in tradeshows.  While the previous marketing strategy was thorough, adding four trade show appearances in 2016 allowed us an opportunity to increase our contractor network by meeting those who were hearing about us online! 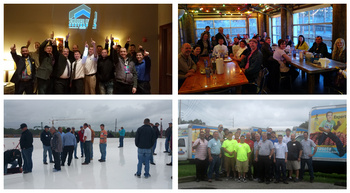 Continuing the upward trend, our endorsed members yet again saw an increase in the number of lead opportunities generated.  This year a whopping 427 roofing leads came in! Other highlights include reaching 197 blogs, 263 comments, and 1000+ subscribers to our weekly newsletter.

We also added additional success stories from our members, arriving at 20 different examples brought to life via videos, recorded calls, and articles. Notably, Sam Hostetler was given the opportunity to share his personal story to nearly 1,000 people in Branson, Missouri.

The national workshops in 2017 were held in Cleveland, Ohio and Tyler, Texas, and the strong attendance numbers once again proved that we were quickly becoming a leading educator in the commercial roofing industry.  The comprehensive roofing event gave contractors of all experience levels hands-on training, sales and marketing strategies proven to work in the field, and an open panel to discuss tips and how to overcome common obstacles!

We were even more excited to see various members of the group rise up and commit to hosting their own local hands-on events on the first Saturday of each month. Michigan, Pennsylvania and Texas roofers were now able to learn directly from successful commercial owners and train their crews with life-like mockups without having to leave their state.

A nationwide coatings magazine, CoatingsPro, began to recognize the group, and in October 2017 Jonathan Keim provided our first contribution to their magazine which then became the top cover story! Since then, we’ve been given additional opportunities to submit content.

To see more details of this year, visit Exciting Achievements of 2017. 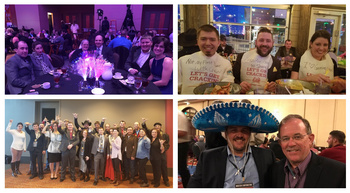 The Choice Roof Contractor Group saw an impressive year in lead generation with another record number of roofing leads achieved!

One of the largest roof leads yet came in – touting an impressive 430,000 square feet!

The group welcomed its first female contractor to the members, hoping to add more in years to come.

And the brand recognition continued, being contacted by over 450 other contractors throughout the nation. Through a new marketing program, we were able to gain placement of our ads on some of the most prominent websites and mobile apps.

To see more details of this year, visit The Excitement Continues – 2018 in Review.

On to the Next Five!

The formula of contractors helping other contractors to give better service to business owners is not common.  However, because we have the right group of people with genuine team spirit for this shared brand, we have been able to share some incredible highlights:

As our first five years come to a close, we continue to focus our efforts on what will help our members and the building owners they serve the most.  We will continue to improve our brand recognition, help our members close more sales, and welcome new contractors who share our values with open arms.

Jonathan is an original co-founder of the group. He brings a wealth of experience in commercial roofing that spans from marketing, sales, product support and much more. In addition to connecting building owners to reputable service providers throughout the nation, he has helped more than 200 contractors expand in the commercial roofing industry.