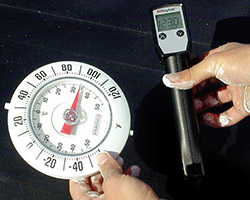 Today’s blog post takes a look at one of the biggest concerns in commercial roofing— the “urban heat island” effect. This effect refers to when a city setting is warmer than a rural location. Another topic of examination that will be covered is a solution being used for this issue— a white, reflective roof coating membrane system.

According to the United States Environmental Protection Agency, cities with one million people or more can be 1.8-5.4°F warmer than their surrounding areas. During the evening time, city landscapes can be warmer by as much as 12°F. What accounts for this difference?

Buildings and other man-made structures absorb lots of heat during the day. In particular, roadways made with asphalt or buildings with dark-colored commercial roofs tend to absorb solar radiation and retain lots of heat, and later emit it at nightfall. In the countryside, plants and vegetation store up much less heat than buildings do in the city. Ultimately, that means they release lesser amounts of heat at night than buildings and other structures do in a city landscape.

According to the U.S. Environmental Protection Agency, there are a few things that stem from this heating phenomenon, which are listed below:

The EPA reports the urban heat island effect can give way to heat-related deaths, but on the whole studies have been less-than-definitive or hardly conclusive about confirming that risk.

A research report from Lawrence Berkeley National Laboratory puts a number value on the influence of the urban heat island effect on peak energy demand. In the report, it was found that the warmer air temperatures could account for 5-10% of urban peak energy demand for air conditioning.

White Roofs to the Rescue 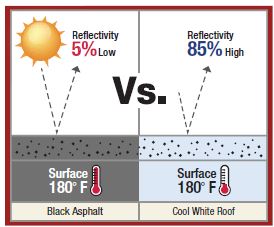 One solution that has been adopted to reduce the impact of these effects is the white roof. Dr. Arthur Rosenfeld, a pioneer in the field of energy efficiency and Distinguished Scientist Emeritus at Lawrence Berkley National Laboratory, has advocated white roofs (and cool roofs in general) as a way to combat the effects of the urban heat island effect for over 40+ years. In an article on Grist.com, Rosenfeld reportedly once calculated people in the Los Angeles basin would save $170 million in energy costs and health-related expenses per year if white commercial roofs were installed throughout the area.

Aside from their mitigating effects on the cost burdens of the urban heat island effect, white roofs help in other ways as well. A white roof reflects solar radiation back into the atmosphere instead of mostly absorbing it, which means the commercial roof’s surface stays cooler than usual. As a result, air around the white roofs remains much cooler, and the adverse environmental and health effects associated with the urban heat island effect are minimized.

For white roofs that are formulated with roof coating products, Conklin® was the company that created and introduced the first white, reflective acrylic roof coating to the commercial roofing industry, in 1977. Since then, Conklin® has continued to play a leading role in the growing use of white roofs. At present, over 2 billion square feet of roofing in the United States has Conklin® roofing products on it.

There are many benefits associated with a Conklin® white, reflective roof coating membrane system. These numerous benefits include:

Conklin® has been a leading choice for high-performance, energy-efficient roofing solutions for roofing contractors, building owners, facility managers, architects, property management firms, building engineers, and other professionals for over 40+ years.