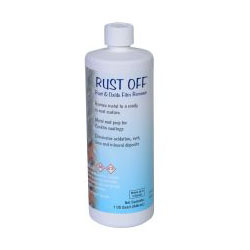 It is essential to clean a metal surface thoroughly before applying coatings. This ensures that the coating serves its desired function and lasts for the full duration of its service life.

However, you cannot use Rust-Off directly to clean a surface that is already coated. You will have to first remove the earlier coating via processes such as sandblasting, scraping, or wire brushing.

Are You a Contractor?
Our group combines the quality training and products from Conklin with incredible support.
Training Programs
Lifetime Support

Rust-Off contains phosphoric acid that reacts with the metal surface and makes it resistant to subsequent rusting. Metal surfaces are often cleaned before coating using processes such as sandblasting, wire brushing, or scraping. Such processes are also used to remove earlier coats on the surface.

Rust-Off removes rust, metal particles, oxides, and all other impurities that decrease the life and effectiveness of the coating. And by doing so, it cuts the maintenance and re-coating costs. Not to mention the peace of mind!

Let us consider examples of certain coatings. Metal Ready® Universal Primer and Maintain® are rust prevention coatings. However, they do not remove existing rust on the metal surface. If you apply them over a metal roof that is rusted, they will not shield the roof from rusting.

Metal surfaces are sometimes sandblasted in order to prepare them for coatings. Sandblasting is also used to remove earlier coatings. The process however makes the cleaned surfaces prone to conventional rusting as well as flash rusting.

If you coat sandblasted surfaces with latex coatings or clean them with tap water, they become vulnerable to flash rusting (i.e. rusting due to metal particles coming out from under the coating). Remember, sandblasting has loosened the metal surface and small metal particles are present over it.

Presence of a thin water film of water on steel is enough to start flash rusting. The source of this water film can be a water-based coating or water used for cleaning.

Flash rusting not only decreases the life and efficacy of the coating, but also destroys its appearance by creating discolorations and stains that can be light yellow, red, or dark orange. While conventional rusting takes days to appear, flash rusting is visible within hours.

Metal Ready® Universal Primer and Maintain® offer only minimum resistance to flash rusting if the surface has not been cleaned with Rust-Off. Apply Rust-Off on sandblasted surfaces to protect them from both types of rusting.