With demand for energy-efficient buildings on the rise, many building owners have been turning to energy-efficient roofing. But there are a number of options for energy-conserving roof systems available on today’s market, and two options stand out as an excellent alternative to a black roof—green roofs and white roofs.

As to which of these commercial roof systems offers greater benefits, advocates on both sides have brought up suitable points. Today, we cover a recently completed case study that took a look at the benefits of green roofs, white roofs, and black roofs. 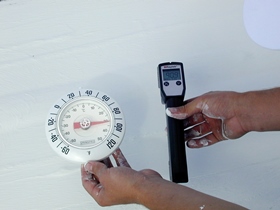 As noted in a February-published news article on SustainableBusiness.com, Lawrence Berkley National Laboratory conducted a study that analyzed the cost-effectiveness and energy-conserving power of green roofs, white roofs, and black roofs. Spanning 50 years, the study involved the close monitoring of 22 commercial flat roofs and assumed a 20-year lifespan for black and white roofs and a 40-year life span for green roofs.

Therefore, from the standpoint of being economical and saving energy, white roofs beat out green roofs. It should be noted that the sample size of 22 commercial roofs for the study is hardly conclusive, though. Add to that the fact that the geographic location of a commercial roof can be a factor, and one quickly comes to the conclusion that the study is not foolproof. Other dimensions could have factored in the study results as well.

Green roofs did hold some advantages over white roofs, namely being the better choice for storm water runoff and production of better air quality.

The article can be found at: https://www.sustainablebusiness.com/index.cfm/go/news.display/id/25492

Other Case Study of Green Roofs vs. White Roofs

The Berkeley Labs’ study did reflect findings from a much smaller study, namely “The Battle of the Bulbs” competition conducted in Chicago in the spring of last year. In that competition, a green roof was pitted against a white roof for determination of which roof type produced lower electric bills. The white roof emerged as the winner, producing more than $40,000 in cost savings over the green roof.

Request Free Estimate
While the study was not a “smoking gun” for white roofs, it did demonstrate some of the factors why a white roof can be highly beneficial for energy conservation and short-term and long-term cost savings. With Conklin roof coatings, a building owner can see up to 30% cost savings on his or her annual cooling costs. Plus, with Conklin roof systems’ ENERGY STAR® certification, building owners may be able to enjoy a slew of tax benefits and advantages.


Should you be interested in learning how a Conklin roof system can benefit your building, backed by a non-prorated warranty that covers labor and material costs for up to 20 years, give us a call at 800-670-5583 for a free room estimate.