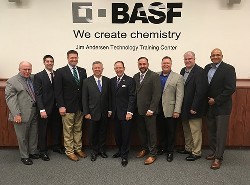 Leaders representing the Conklin Company and BASF Corporation met in Houston, Texas, earlier this month to prepare for future joint ventures between the two companies that are planned to take place within the commercial roofing industry.

Conklin and BASF have successfully partnered nationally in the spray polyurethane foam insulation business for more than 25 years. In today’s environment of money-consciousness and increased concern over energy efficiency, spray polyurethane roofing foam systems are continuing to gain market share.

“BASF Corporation and the Conklin Company share the same fundamental commitment to quality and customer service. We are very excited to expand our business together in the North American commercial roofing market,” Conklin Company Owner, President and CEO Charles W. Herbster said, as quoted in a press release from Conklin.

Dave Heineman, former Governor of Nebraska and member of the Conklin Company Board of Directors, further stated:

“Conklin Company Independent Distributors and roofing contractors hold a special place in the free enterprise system as business owners, entrepreneurs, and drivers of the U.S. economy. The Conklin Company and BASF Corporation have a large impact on the roofing industry and our collaboration together, both now and well into the future, is a very powerful combination.”

BASF Corporation is a highly respected chemical manufacturing company based in Germany, with annual worldwide sales totaling over $70 billion.

Details regarding the expanded joint venture between Conklin and BASF Corporation discussed during the meeting will be released in the coming months.

Jonathan is an original co-founder of the group. He brings a wealth of experience in commercial roofing that spans from marketing, sales, product support and much more. In addition to connecting building owners to reputable service providers throughout the nation, he has helped more than 200 contractors expand in the commercial roofing industry.